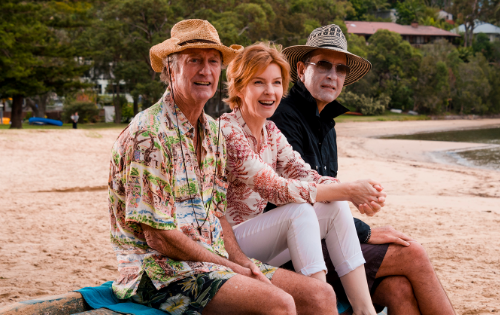 Rachel Ward’s “Palm Beach” is the kind of film which is instantly and effortlessly infectious because you can tell the people involved are having a great time. It’s easy to buy the chemistry between the actors here because it genuinely does look like they’re having a ripper weekend surrounded by lashings of booze, decadent food against a stunning backdrop and the camera’s just been whacked on for fun. Doesn’t hurt that this thing is so pumped full of golden oldies that you’d be forgiven in thinking that Smooth FM had been in charge of the soundtrack.

This is a very safe movie with a very deliberate appeal and targeted audience. My girlfriend and I were the youngest people in the cinema by a good twenty years and I have to admit that a lot of the jokes went right over my head, but there is a definite charm about the whole thing. The showcasing of Australian talent here is undeniable, and that’s one of the definite selling points of the film, but unfortunately all the charm of Palm Beach is surface deep and can’t quite distract from the forced plot and painful script.

Palm Beach is essentially a diluted version of The Big Chill, and the basic premise is almost identical. Frank (Bryan Brown) and his wife Charlotte (Greta Scacchi) and their kids are entertaining the old gang at their incredibly situated and tastefully decorated house up at Palm Beach on Australia’s east coast for Frank’s 73rd birthday. The old gang are as follows: Leo (Sam Neil) and Bridget (Jacqueline McKenzie), Billy (Richard E. Grant) and Eva (Heather Mitchell) and a smattering of their respective kids. Over the course of the weekend, old tensions flare up, love triangles are rekindled and the paternity of one of the kids is thrown into the mix. Couples fight and break up, then get back together, friends fight and throw punches, then make up. By the end everyone is happily dancing around the newly cemented outdoor pizza oven and drinking margaritas while 20 years of animosity and conflict has conveniently and neatly been resolved.

The plot is soap opera-esque and incredibly predictable, but that’s not necessarily a bad thing; films like this are pure escapism and if the filmmakers want to deliver something light and unrealistic and fun then there’s no reason why they can’t. What ruined it for me was how appallingly bad the dialogue was, and it seemed like the actors at many points were really struggling to work their way around it.

The performances are categorically fine. It’s undeniable that there are some of Australia’s best actors showcased in this film and there’s nothing overtly offensive or grating them on screen together, it’s just that they’re given so little to work with. Towards the end of the film, after a particularly powerful close up of Greta Scacchi’s character, I sat and imagined how much better the film would have been without any dialogue at all, almost like a silent film or the opening to “Up”. Almost all of the moments in the film with any emotional significance or comedic relief aren’t generated by the script, but by the moments in between.

The people in my theater had a great time with this movie, and I did too to an extent. It’s easy and indulgent fantasy, and the fun the actors are having on screen is genuinely infectious. It’s a shame though, because there is quite a lot lacking here and I think that this could genuinely have been something really interesting and insightful if the filmmakers delved a little deeper and made proper use of the talent at their disposal.