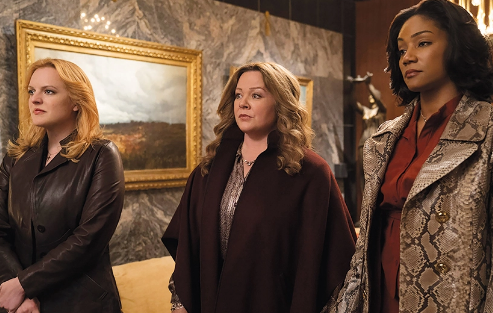 Andrea Berloff’s “The Kitchen” is just about as bad a film you can get, and breaches the point of being uncomfortable and into being so horrendous that it’s actually funny. This was staggeringly incompetent in every possible sense; from the blatantly stupid script to the clunky performances and the story itself which charges along for an hour and 40 minutes without a hint of originality or self awareness.

It’s strange because Berloff has worked on some fairly successful films as a writer, most notably “Straight Outta Compton” (which was nominated for an Oscar for best original screenplay) and “World Trade Centre”. Berloff directed “The Kitchen” as well as wrote it, so it could well have been that she simply isn’t much of a director, were it not for the script itself which is potentially the worst aspect of the film.

I’ve spoken before about films which champion female empowerment and how there are some which have done it beautifully through character development and good storytelling. Then again there are others which throw in feminist catch phrases throughout and, almost arrogantly, assume that that’s enough. The Kitchen unfortunately falls into the latter category, with such gems as “All these men working these streets, and not a solid set of balls anywhere” and “All my life I’ve had men holding me down, now we run this neighbourhood”.

“The Kitchen” is based off a comic book series of the same name and tells the story of three women in the 1970s whose husbands are members of the Irish mob and take over operations when their husbands are sent to jail. The whole film is basically these three women (Melissa McCarthy, Tiffany Haddish and Elisabeth Moss) as they take over control of crime operations for New York’s Hell’s Kitchen, delivering sassy one liners and then strutting away to songs like “Ooh barracuda” with occasional moments of unnecessary and blatant violence and gore.

The frustrating thing is that there is potential here for something quite cool; an almost identical premise worked incredibly well for last year’s “Widows”, which was well acted, had an engaging and intelligent script and delivered on everything you could want from a gangster flick.

It’s actually a fun premise and could have been something really interesting, perhaps not up there with Scorsese’s mobster flicks but certainly something more than this crock. Melissa McCarthey honestly should know better; it’s obvious that she’s trying to break out of the slapstick routine that she landed in after “Bridesmaids”, and her turn in last year’s “Can You Ever Forgive Me” was commendable.

It’s undeniable that McCarthy is better than the material she had to work with, and it’s obvious that she’s trying to make it work. The only reason I’m giving this movie half a star at all is because of some moments towards the end where she actually managed to rise above the dialogue and deliver somewhat of an emotional response.

Elisabeth Moss is fine I suppose, but dammit somebody needs to stop Tiffany Haddish now. She can’t act, is pointedly irritating and is absurdly miscast in this film. The three leads have little chemistry, and their interactions feel more like disjointed audition pieces than actual conversations.

I was the only person in the cinema for this showing of “The Kitchen”, and within three minutes it was obvious why. Somewhere in this mess was real potential, but as it stands now, is in the running for the worst film of the year.