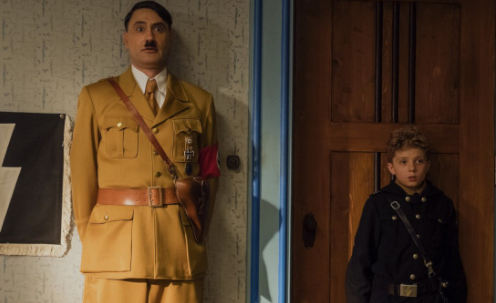 There is an air about certain films that really bothers me, where it’s like the director is sitting there, looking at the audience with a smug look on their face and awaiting roses and applause to be thrown at them. Taiki Waititi’s “Jojo Rabbit” reeked of this, as if the film was trying to convince us that it’s a provocative and insightful masterpiece without actually having to follow through.

It’s a shame because the concept of the film is actually quite a clever one; Johannes “Jojo” Betzler (Roman Griffith Davis) is a ten year old German boy who’s a member of the Hitler Youth during WWII and idolises Adolf Hitler above all else. He wants so desperately to be a good Nazi and creates an imaginary version of Hitler he calls Adolf (played by the film’s director Taika Waititi) who is his friend and who tells him that the older boys bullying him aren’t what the Führer is looking for and that he needs to be brave. Jojo’s faith in the Third Reich is challenged however when he discovers that his mother Rosie (Scarlet Johansson) is harbouring a young Jewish girl (Thomasin McKenzie) in their attic. But he’s confused, because Elsa doesn’t have horns or a tail, so he promises to keep her hidden if she tells him all the secrets of the Jews for his new book.

It’s a solid premise for a film; highly original and provocative, but a film is nothing without proper execution and for me, “Jojo Rabbit” just missed the mark in so many ways, especially with regard to the comedic and satirical slant it was so desperately angling for. I think what’s happened is that the scriptwriters have relied solely on the zaniness of the premise without exploring it with any real insight and without actually managing to say anything profound at all. I didn’t laugh once in the scenes with Jojo and Adolf; the humour was lazy, slapstick and inconsistent and oozed with the pretentiousness of a high school drama piece that’s gotten carried away with its own importance. The amount of clunky symbolism in this is almost unbearable (whoever put forward the idea for Jojo not being able to tie his shoelaces until he’s brave enough to take on the big world should have been sacked).

All the German characters are one dimensional caricatures who are neither funny nor sinister performed by Americans with broken, laughable German accents. The trick with satire is to handle it so that it’s ridiculous enough to make us laugh but realistic enough that we as an audience can recognise an element of truth in it. These characters, especially the Nazis, were so absurd and cartoonish that I couldn’t suspend my disbelief and allow myself to buy into this world. And it’s enough, someone needs to stop Rebel Wilson now before she derails something else.

While the comedic and satirical aspect of the film is a total flop, there are elements that worked pretty well as a war thriller. There are some genuine moments of suspense, particularly a tense scene when the Gestapo visit Jojo’s house looking for fugitives which had me on proper tenterhooks. There are almost moments of sweetness between Jojo and Elsa, but the script is tonally inconsistent and again, the screenwriter has relied on the fact that Griffin Davis is adorable and angelic rather than properly developing him a proper voice. His expression jumps all over the place; sometimes he speaks like a five year old, then sometimes like a grown man and sometimes with expression more consistent with the twenty first century than WWII. Griffin Davis actually does fairly well in the titular role; he could have been completely intolerable as child actors so often are but he showed impressive range and carries himself surprisingly well (even if he wasn’t working with the greatest material). Scarlett Johansson was admittedly sensational as Jojo’s mother, (holy dooly has she had a good year) and brought a warm and genuine humanity to a film which is otherwise so superficial and ankle-deep.

There’s a good film somewhere in here, and in the hands of someone like Tarantino this could have really been something interesting, but a clever concept isn’t enough without substance to support it. It was a bold move taking on such a risky subject matter and in my mind it hasn’t paid off; what’s left is a shell of a film which doesn’t have anywhere near the incisiveness, heart and message that it thinks it does.