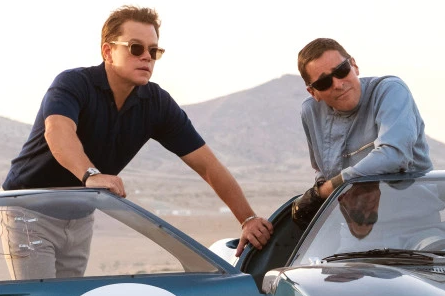 “Ford v Ferrari” is pure, glossy entertainment, and unashamedly so. It’s far from revolutionary and is by no means perfect, but it’s a fast paced, thrilling, cheesy racing flick with goodies and baddies and an exciting lead up to a climactic final race. The heroes are quick witted, reckless, handsome and we as an audience can’t help but root for them all the way as they play by their own rules and give authority the finger all the way. The baddies are sleazy, stitched up, money hungry corporate drones in grey suits. And the cars are fast and loud and freaking cool.

“Ford v Ferrari” tells the true story of when Ford famously beat Ferrari at the 24 hour 1966 Le Mans race in France, subject to some poetic licence. Following Enzo Ferrari’s rejection of Ford’s offer to buy them out, Henry Ford II decides to take the advice of Ford Motor Company Vice President Lee Iacocca, invest in his own race car and defeat Ferrari at Le Mans and humiliate Enzo Ferrari. Iacocca hires owner of “Shelby America”  Carroll Shelby (Matt Damon), a racing driver who won Le Mans some years before, to manage the development of the racecar and the drivers. He enlists Ken Miles (Christian Bale), an unconventional and plucky British racer to compete at Le Mans who definitely doesn’t conform to the “Ford image” and the film follows the journey to Le Mans and the conflicts between Shelby and Ford Senior Vice President Leo Beebe (Josh Lucas) to get the car over the finish line.

The friendship between Shelby and Miles is a central theme of the film, and Damon and Bale have undeniable chemistry. Neither of the performances are Oscar worthy, but neither is the material they’re working with; both actors understand this and have fun with what they’re doing. The film reminds me of those 90s classics like “The Mighty Ducks” or “Cool Runnings”; through the medium of sport, we are taught about the value of friendship, family and how winning isn’t everything (although that’s easier to swallow if the heroes actually do win). There are plenty of textbook heartwarming and touching moments, especially with Miles and his son (Noah Jupe) as he seeks to bestow his love of racing onto his son.

There are no shortage of funny moments either though, notably a scene where Miles and Shelby get into a scrap in the middle of the street (not dissimilar to Colin Firth and Hugh Grant in Bridget Jones’ Diary) and Miles’ wife (Caitriona Balfe) brings out a deck chair and Coca Cola to watch. Caitriona Balfe as Mollie Miles is unexpectedly actually quite impressive; the perfunctory wife role in films like this are often thankless, but Balfe brings a real authenticity and grit to her performance and keeps up effortlessly with the powerhouse that is Christian Bale.

One thing I would have loved to have seen is Miles and Shelby properly get back at Leo Beebe before the end of the film, even if it was just them dumping a vat of something over his head and ruining his suit. In fact it was a little confusing how Henry Ford and Leo Beebe were portrayed; we’re supposed to be rooting for Ford to win, but Ford and Beebe are scheming scumbags. We’re supposed to be suspicious of the Italian Ferrari team, but they’ve never actually done anything wrong and in the commotion of one of the final scenes, Enzo Ferrari tips his hat to Miles for his race. It was a nice moment, but a movie like this should have just made it easy and made the goodies the goodies and the baddies the baddies.

I think that’s the thing; this should have been a D grade movie which went straight to DVD, but with this script, the cinematography the way it was and such a stellar cast, there’s a good chance that “Ford v Ferrari” could easily slot in with those feel good sports films of the 90s.